Thumb sucking and dummy sucking are natural habits which comforts and relaxes the child. Psychologists say that the prolonged use of dummy or thumb sucking is related with the emotional absence of the mother. Also, if a mother does not breastfeed their child long enough then the child will find the comfort they are looking for in such habits, in order to satisfy their needs for peace, tranquility and relaxation. However, parents should be aware that if these habits continue over the age of 2 years old, they interfere with the normal development of the jaws and in particular may cause the following to some extend:

If the parental environment allows it, start efforts to stop these habits around the age of 2 years old. It is advised to avoid insults or comparisons with other children. Remember, each child is unique and has different needs.

When the child matures and is able to communicate well, you can begin to restrict the use of these habits. Put restrictions on when the child can practice these habits. Replace their enjoyment of these habits with other things such as holding soft stuffed animals, telling them more stories or embracing them during bedtime. During the day, you can give them toys that will occupy both their hands, or other activities which will help them forget about the use of dummy or thumb sucking.

If your child continues thumb and dummy sucking beyond age 4 it is a good idea to bring them to our office. Many times, only by talking with the child or even urging with them may help them throw out their dummy of stop placing their finger in their mouth, the same exact night. However, this will only happen if the child is ready to do so and just wanted some help. If the child does not stop only through communication and if the child is asking for our help, then we can suggest a special fixed oral appliance which is placed in the mouth for 6-9 months and does not allow the finger to enter the mouth. Usually the child stops this habit immediately. 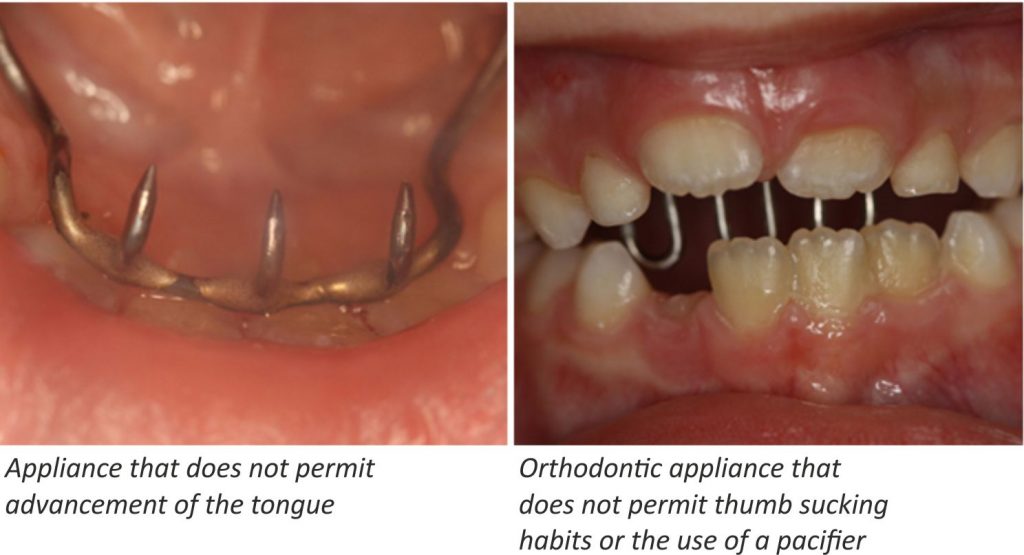 Important note; it is not allowed in any case, the abrupt and brutal interruption of breastfeeding, dummy use or finger sucking without the consent of the child since this would cause a deep psychological trauma to them and resort to other much worse habits during adolescence.

More related to this: article on thumb sucking by psychologist Tenia Makri.

Grinding of the teeth

Most of the time small children grind their teeth during their sleep. We do not know the reasons for such habit and we cannot really help them during this case. However if the child still has this habit after the eruption of their permanent teeth and the occlusal surfaces of their teeth are worn off and flattened, we can provide them a splint that can be used during night time sleep. This splint is a removable transparent plastic guard which protects the tooth enamel from the damage that is going on during the process of grinding. Remember that most of the time this habit goes away as the child grows and approaches puberty.

Harassment of the gums with nails

The child’s habit of harassing his gums with his nails can cause the gum to recede and thus reveal the roots of the tooth which in turn results in sensitization of the area and gingivitis. 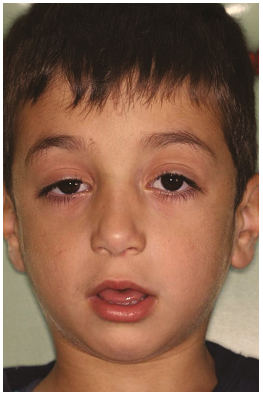 It is a serious problem if the child continues to breathe through his mouth instead of his nose while growing up. Mouth breathing is pathologic and under no circumstances should be considered physiological. Usually, it is due to enlarged tonsils and adenoids, allergic rhinitis or deviated nasal septum.

Very often mouth breathing remains unnoticed from the parents and the Pediatrician. Chronic mouth breathing affects negatively the growth of the face. It leads to a characteristic type of face known as adenoid face (see image).

This happens when the tongue sinks into the lower jaw in order to open the upper airway (image 2), instead of touching the palate (image 1). This results in:

• An opening between the upper and lower front teeth (openbite)

Apart from crossbite, chronic mouth breathing in children can cause insufficient brain oxygenation which leads to lethargy, tired look like face, dark circles under the eyes, constant fatigue and poor performance in the class and in sports. These children also have a poor quality of sleep due to this breathing disorder. This condition causes a reduction of the growth hormone which is mainly produced and released during sleep from hypophyses, a gland that is located in the brain, which eventually leads to short statue children. Once normal breathing is established in the children, all the above symptoms disappear and normal growth returns . The earlier the correction the better the results are.

It is good to keep in mind that no Orthodontic problem can have a stable result if the child continues to breathe through their mouth.