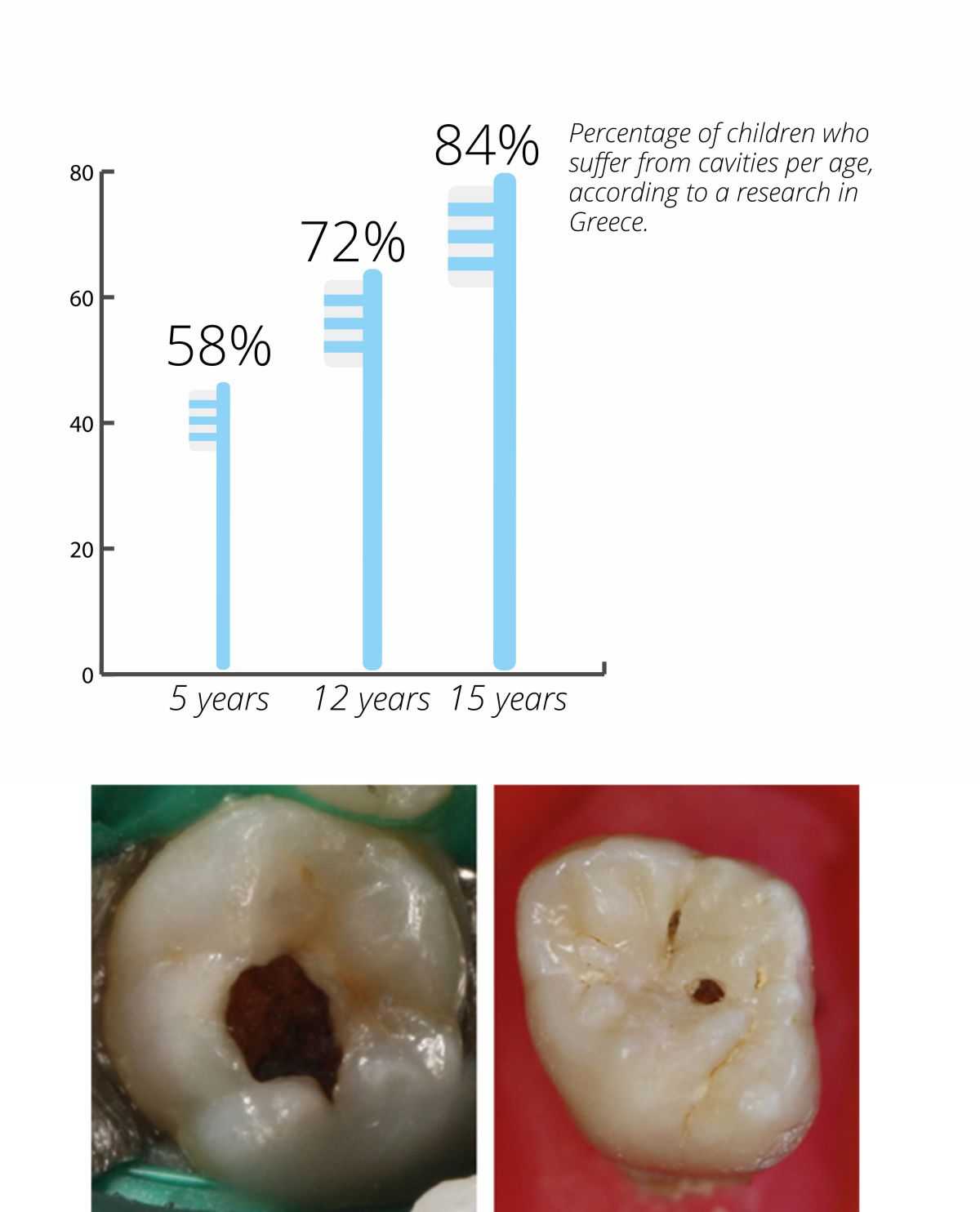 With time, the percentage of teeth that are cavitated has been greatly reduced due to the use of Fluoride and the information provided to the general public. However, even today in the developed countries of western culture, 80% of the tooth decay problem seems to affect 20% of the population of the lower socio-economic sections. According to international epidemiological studies 1 out of 4 children aged 5 years old, 1 out of 2 children aged 12 years and 8 out of 10 adolescents suffer from dental caries. In Cyprus there has not been a statistical survey on the above issue. From the observations we make in our patients and only in our clinic we could say that tooth decay is a phenomenon that manifests in all children regardless of socio-economic status. Let’s start explaining what a dental cavity is.

What causes a Dental cavity?

A dental cavity is a multifactorial, microbial type of tooth disease due to multiple factors. A cavity is essentially the result of 4 factors being carried out as described in the diagram. 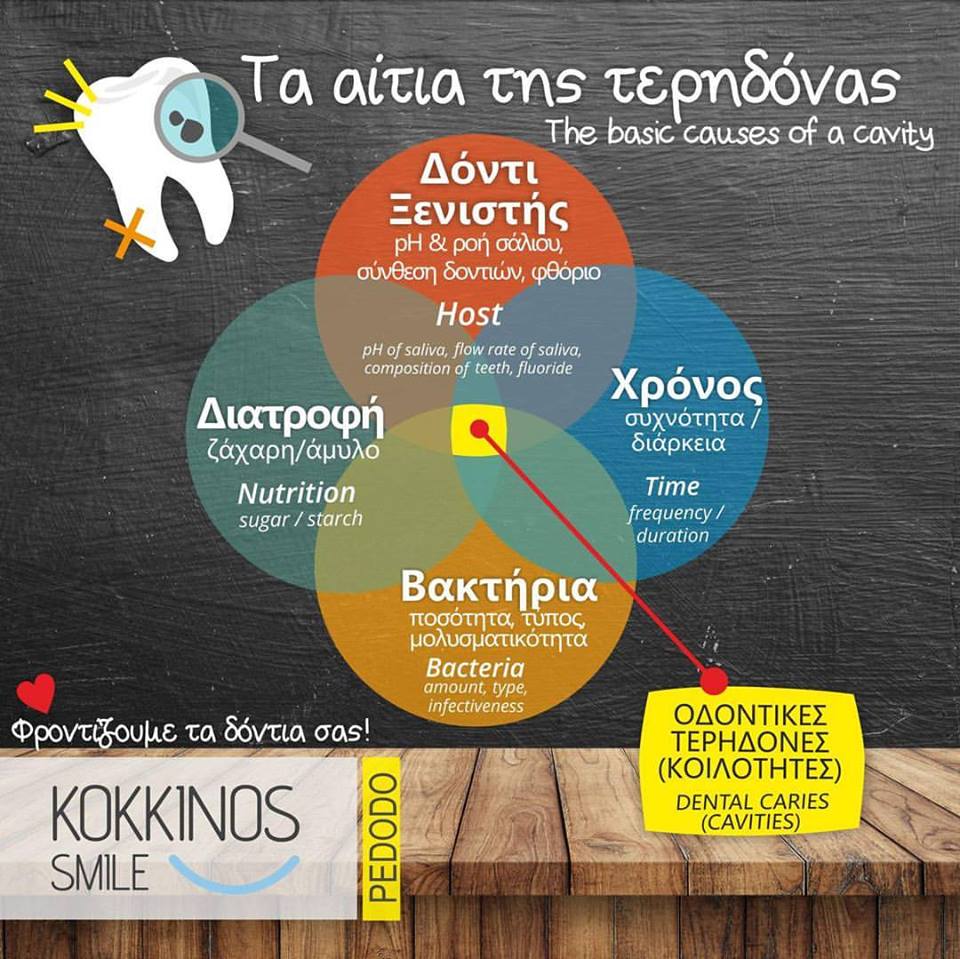 Dental decay is caused by bacteria combined with food (sugar or starch) which come into contact with teeth. After a meal, the bacteria ferment the sugar and starch of foodstuffs and transform them into acids. Acids are then retained by the tooth enamel and dissolve the calcium found on the external surface.

This harmful acid effect lasts only 20 minutes after every meal. To follow, the amount of calcium which left the teeth, returns to the surface. This back and forth movement of calcium from teeth to saliva and vice versa is repeated every time we eat. When the frequency of food intake is increased, for example, children who nibble continuously during the day there is a permanent production of acids and therefore an increased calcium deficiency from teeth resulting in the development of dental decay. Intervals between meals are essential so that the organism may restore the calcium loss from teeth by the intake of food. Research has shown that a food intake rate up to 6 times a day does not increase the risk of dental decay.

The second factor and possibly most important one according to contemporary research, is the number of specific cariogenic bacteria in the mouth. If the number of such bacteria is increased, the possibility of dental decay development is also increased.

The following advises are very important:

Saliva. Decreased salivary secretion enables the development and accumulation of bacteria. Also increased acidity in saliva may increase risk of dental decay. We provide a special saliva test where we can evaluate the quality ant the type of saliva your child has.

One of the biggest threats to the dental health of your child is the use of the baby – bottle filled with milk, juice or tea at night time. If your child falls asleep with a baby bottle in his mouth, his teeth will be soaking for hours in a sugary liquid (milk, juice or tea), which may create a severe pattern of dental decay called “Baby Bottle Syndrome” (now it is called early childhood caries). During day time, the same juice or milk is dissolved rapidly by saliva and swallowed. During night time sleep however, swallowing and salivary secretion are slowed down and this gives sugars plenty of time to interact with bacteria present in the mouth and create acids which destroy teeth and cause dental decay .The baby-bottle syndrome may appear from the age of 12 months and lead to complete destruction mainly of the upper front teeth as well as back teeth within a few months, with a dramatic impact on the appearance, chewing and speech of children. Sleepless nights, due to pain are very frequent.

The following conditions must apply in order to prevent the baby – bottle syndrome development:

Gingivitis is the inflammation of gums caused by the presence of an increased bacterial plaque on teeth. Gums appear irritated, swollen and bleed easily. Long term gingivitis causes periodontitis, which is loss of bone surrounding the tooth, tooth loosening and eventual tooth loss. Gingivitis can be prevented by correct tooth brushing and flossing. Also, certain antimicrobial mouthwashes can help reduce gingivitis but only under the guidance of the Dentist.